Home Tips Differences Between Chilies And Peppers: Find Out Here

If you love eating Tex-Mex food, you might have come across the words “peppers” and “chilies” on restaurant menus or recipe guidelines. While commonly used interchangeably, peppers and chilies are relatively different in shape, taste, and origin. So, how exactly are the two different?

This article will settle the debate of peppers vs. chilies once and forever. So, let’s get started! 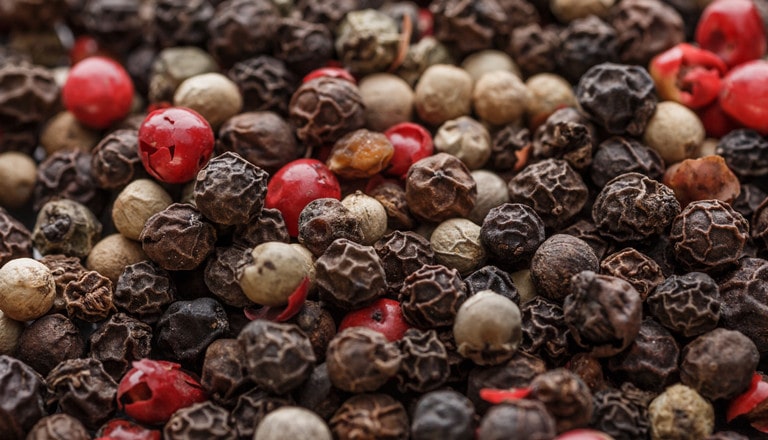 Peppers are a fruit of a vine called Piper Nigrum. All four peppers, black, white, red, and green peppercorns, come from the same plant and are the same berry; the only difference is that they are harvested differently.

Pepper is usually dried and grounded in powder form. Moreover, you’ll find that each grind gives a varying sensation of heat and intensity.

These grinds are used as spice seasoning to flavor food or add aroma when sprinkled on a dish. Its flavor is described as spicy, earthy, woody, and hot to taste. 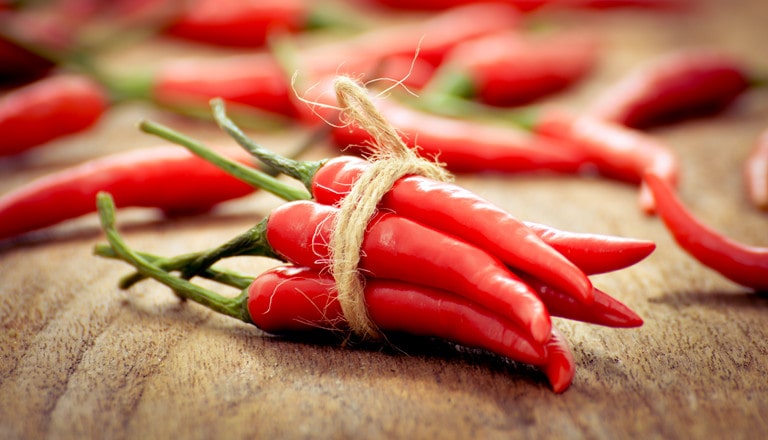 Chilies come from the genus capsicum, a nightshade family member known as Solanaceae. They, too, are considered fruit botanically because they contain tiny seeds and are grown from a flower.

They are widely used and consumed as spice or medicine. Chilies are typically deemed as “spicy,” more so than peppers. They consist of a compound called capsaicin, which gives us the instant “kick” when we bite into it.

Peppers Vs. Chilies: The Differences 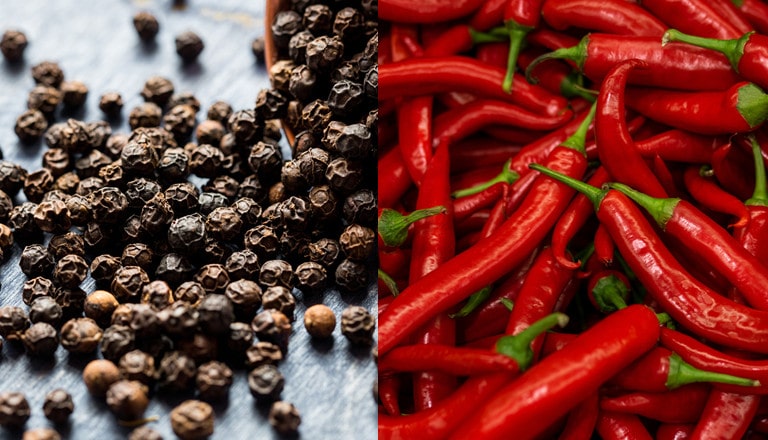 While people often confuse the two, peppers and chilies are not synonymous. In fact, they differ greatly, particularly in terms of usage and flavor profile.

Chili is commonly referred to as chili pepper and comes in either whole, dried, or ground as a powder. It is often used in cooking meat and vegetables to add spiciness. They have a fiery, spicy, and hot taste which gives a burning sensation when tasted raw.

On the other hand, peppers have a more subtle heat. They are often described as pungent and earthy to taste. The word pepper covers the various members of the genus Piper, ranging from bell peppers to black and white pepper.

Chilies are used in cooking to mellow down the intensity. They are abundantly used in Mexican, Tex-Mex, Indian and Thai cuisines. Conversely, peppers are often used as a seasoning, sprinkled on top of food, or added for aroma.

Chilies can be chopped or added as a whole in dishes. Or they may be ground into a powder form or blended with other spices to make chili powder. At the same time, pepper is produced by crushing dried peppercorns, chopped, or added whole, depending on the variety used.

Pepper has dominated the spice world for a long period. The history of pepper dates back to thousands of years ago when it was cultivated and native to India.

Pepper was popularly used in cooking and medicine and soon became an important trading commodity. The spice trade between India and the Roman Empire became profitable and an integral part of Roman Food. Soon enough, it was traded on land along the silk road.

The history and origination of chili can be traced to Mexico, where its use and consumption still dominate Mexican culture. They have been used for more than 2000 years, particularly as medicine, due to their anti-inflammatory properties.

Christopher Columbus came across chilies during his quest, which he erroneously referred to as a “pepper due to the similarity of heat and spiciness.” Hence chilies are also referred to as chili peppers.

There are around 4000 varieties of chilies which belong to 35 different species. Five belong to capsicum species, while the rest are part of the wild form. The most popular chilies are Jalapeno, habanero, cayenne pepper, ancho ranchero pepper, and Tabasco.

On the other hand, there are around 600 types of peppers, but only a handful of them are used as spices. They are distinguished by how they are processed and matured. The most popular peppers are black, white and green, and red pepper.

Chilies have numerous varieties and are complex, and so is their flavor profile. Depending on the type, you can find them sweet and smoky, hot and pungent, spicy and fiery. The milder variety of chilies, like bell peppers, tastes sweet.

The shape of chilies largely depends on their variety. Wide varieties of chilies have an elongated shape. They may be slightly curved or straight and range from short to long or thin and tapered. They may also come in bell-shaped or conical and even oval or round.

Peppercorns grow in clusters called spikes. They are small and round, have a berry-like shape, and are only 0.2 inches small.

Chilies are popular for their culinary use. They may be added to food to add spiciness or heat. They are an integral component of many cuisines like Mexican, Tex-Mex, and Indian cuisines. They are also paired with dark chocolate or used to flavor chocolate to enhance the flavor.

Chilies are also consumed due to their health benefits. They can help boost metabolism, aid weight loss, prevent heart diseases, and have several anti-inflammatory properties.

Peppers are often used as flavoring or seasoning. Pepper spices can be used in many savory dishes, from salads to soups, from spice blends and rubs to buttermilk. Most commonly, they are sprinkled on top of food, like a fried egg.

Peppers are also consumed due to their various health benefits. They are loaded with antioxidants, improve blood sugar levels, lower cholesterol, and can fight against cancer.