Home Tips How To Tell If Salmon Has Gone Bad?

Salmon, with its mild, refreshing flavor and firm texture, is one of the most amazing seafood available. It’s perhaps the most popular fish that most of us would love to keep on hand to create enticing meals.

So, if you’re in the habit of storing salmon in the fridge, only to discover it days later and wonder if it’s safe to eat, you’re not alone. How to tell if salmon has gone bad? Are there any major signs to watch out for? Let’s find out.

Eating fish that’s gone bad can put you at risk of a range of food-borne illnesses that can do a number on your immunity. To avoid this potential risk, it’s a good idea to familiarize yourself with signs that indicate that your salmon is not safe to consume.

Appearance is one of the most obvious giveaways, which means even inexperienced cooks will be able to tell if their fish is spoiled.

Take a look at the color of the flesh. Salmon has a beautiful pink-orange hue, so if you see your salmon filets turning grayish, lifeless, dull, or opaque, it’s a clear sign that it’s gone bad.

You may also want to keep an eye out for dark spots and discoloration, mold, and milky white residues as they indicate the fish is spoiled.

For The Whole Salmon

Take a look at the eyes. If they’re shiny, clear, and slightly bulging, the fish is good to eat. However, if the eyes seem sunken or filmy, it’s got to go in the bin.

You should also keep an eye on the overall shape of the fish. If it is beginning to curve, it could also be a sign that your salmon is not safe to eat.

Fresh salmon has little to no smell and is almost odorless. It’s one of the reasons why salmon is so popular.

So, if you open the package and notice a strong, overbearing “fishy” smell, toss the whole thing out. Any ammonia-like smell, muskiness, and even pungent, rancid, and sour smells are a strict no-no as they indicate that your fish has gone bad, making it unsafe for consumption.

Salmon has a pretty firm texture. If it feels slimy to the touch, even if looks and smells okay, off in the bin it goes. It’s always better to err on the side of caution, especially if your health is at stake.

To assess the damage, press a finger into the filet. If the flesh feels firm and moist and springs back into place, it’s good for consumption. If it’s mushy, slimy, and feels like it’s falling apart with touch, it’s gone bad. 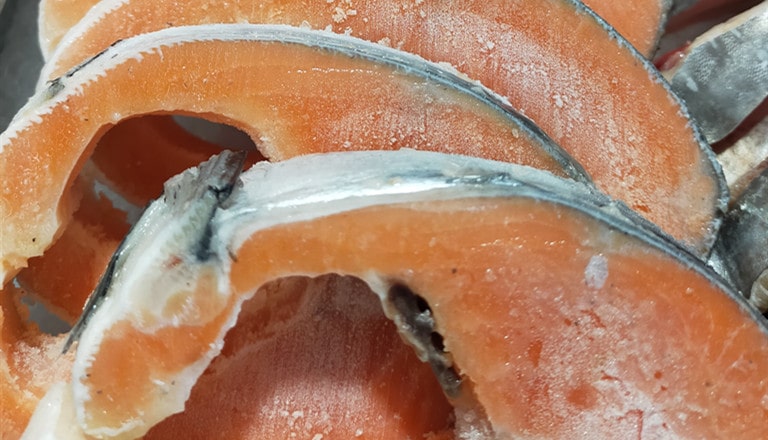 A lot of people believe that cooking bad salmon at high temperatures would rid it of food-borne pathogens, but it’s not as simple as that. Some types of bacteria can develop heat-resistant spores, so even if you cook bad meat, you could be susceptible to food-borne illness.

It is a seafood-toxin poisoning that can significantly impact your health, with symptoms like gastrointestinal distress, diarrhea, headache, vomiting, muscle aches, itchiness, and temperature fluctuations.

It’s caused by improper handling and storage of seafood and can cause flushing, rash, gastrointestinal distress, and hives.

So, if you do the math, the risk just isn’t worth it — especially if it comes at a cost to your health. 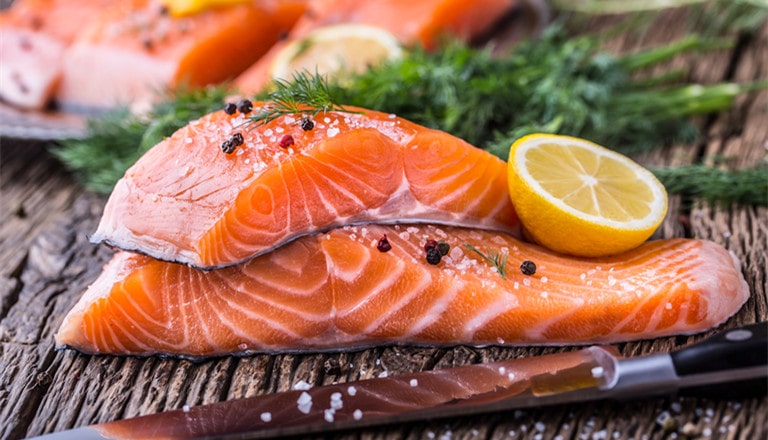 The definition of “fresh” changes depending on where you brought the salmon from.

If you bought it from a store, it will not have a long shelf life. So, you will have to cook it the day you got it.

If you purchased it from a fisherman, the flash-frozen fish will last for up to 5 days in the fridge after thawing it. Even so, it would be a good idea to prepare it the day you get it or the day after.

Cooked salmon will last a day or two in the fridge, and smoked salmon can last anywhere between 3-4 days. You can also prolong this shelf life by freezing it, which can make it last for 2-3 months without compromising the fish’s nutrients and flavors.

You should also practice due diligence when reheating cooked fish, or you may risk getting botulism poisoning. And if your cooked salmon has developed a strong sour smell and slimy texture in the fridge, that also means it’s not safe to eat.

When it comes to food, even if there is an inkling of doubt that your salmon has gone bad, it’s wise to skip it altogether. It’s always better to be safe than sorry.