If you have celiac disease or gluten sensitivity, you probably find yourself questioning every ingredient in your food. Sushi seems like a safe option. But is sushi really gluten-free?  Well, it’s not that simple.

So, Is Sushi Gluten-Free? 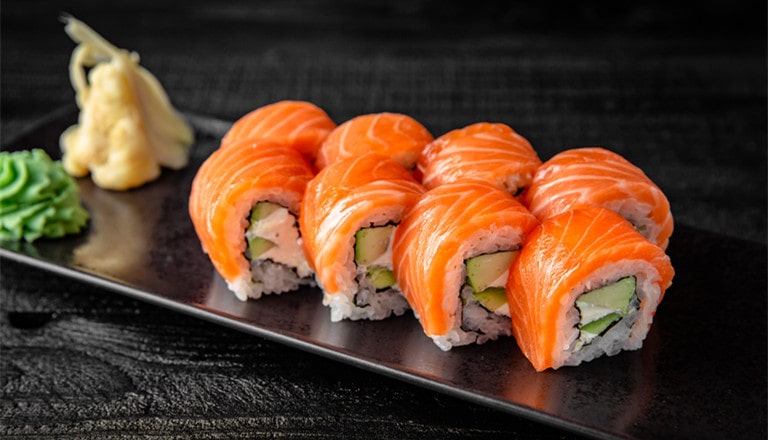 Well, depends on what type of sushi you order.

Sushi is made with veggies, seaweed, fish, and medium or short-grain rice — all of which are gluten-free.

But, if your sushi also contains tempura, breading, or marinade, it won’t be suitable for consumption for those with gluten sensitivity. The same goes for soy sauce, which has wheat, and surimi (fake crab meat), which is made with wheat starch.

You’d think those are the only ingredients you have to avoid, right? Wrong.

Some other ingredients like wasabi and vinegar used to make sushi rice could also contain gluten!

What Ingredients Should You Avoid To Make Your Sushi Gluten-Free?

Certain ingredients in sushi are not considered suitable for those on a gluten-free diet. Knowing what they are can help you make more informed decisions to make your sushi safe for you to consume. 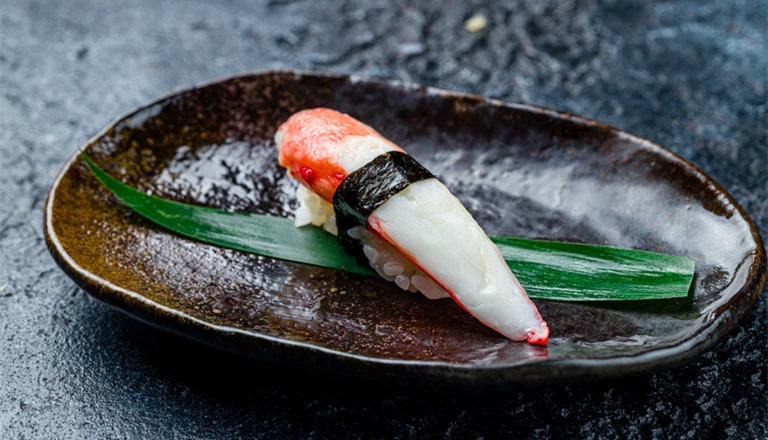 Surimi, or imitation crab meat, is made with white fish that has been ground into a paste and bound with starch, egg white, and a couple of other ingredients. As the starch used to make surimi could come from wheat, it may contain gluten, making it problematic for those on a gluten-free diet.

California rolls and other surimi-based rolls are not gluten-friendly, so you should avoid getting them altogether. Most restaurants are upfront about the ingredients that go into their sushi, so you can always ask them to avoid adding surimi to your rolls. You can also explore other alternatives if that’s an option in the sushi restaurant you’re visiting.

2. Sushi That Has Tempura 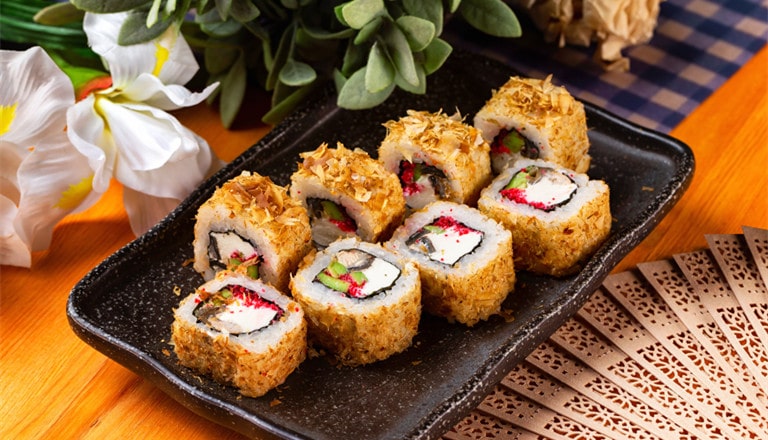 Fried sushi is immensely popular, and if you’re a fan too, you might want to check the batter ingredients.

Seafood and veggies are sometimes breaded and deep-fried with tempura before they’re added to the sushi rolls.

Tempura batter is typically made with wheat flour, so it is not gluten-free. Hence, those with gluten sensitivity should avoid sushi with breaded ingredients as they are not considered suitable for gluten-free diets. 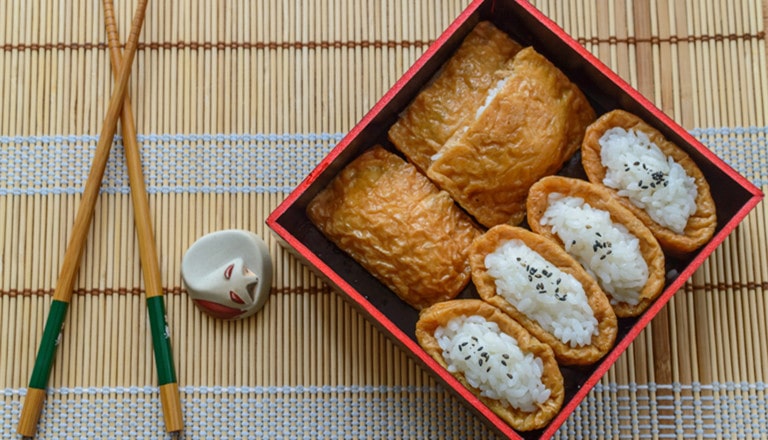 Some sushi rolls contain marinated meat and seafood, and the marinade used to coat the fish can contain soy sauce. As most soy sauce is made with wheat, sushi made with marinated ingredients won’t be fit to include in your gluten-free diet.

You should also avoid teriyaki, Ponzu, BBQ, and eel sauce marinade, as these sauces contain soy sauce as an ingredient. And while we’re on the subject, it would also be a good idea to avoid Tamagoyaki — a type of Japanese omelet made with soy sauce — and spicy sauces that can contain mayonnaise.

4. Sushi That Has “Fake” Wasabi 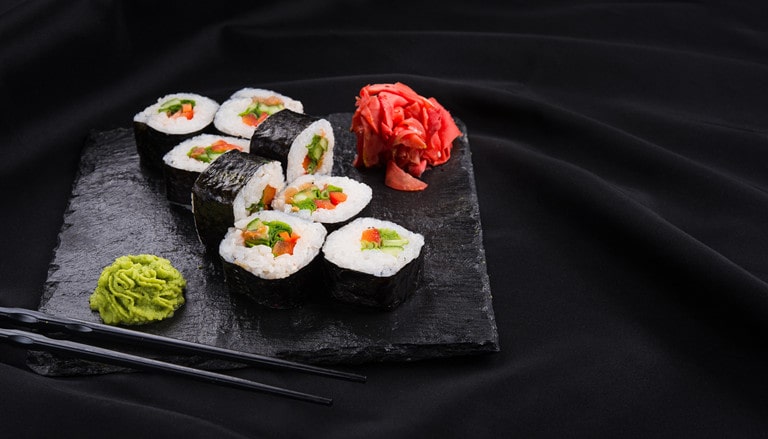 Wasabi, also called Japanese horseradish, is an eye-watering pungent paste commonly served in or with sushi to give it a flavor kick. It’s the perfect ingredient to tantalize your taste buds.

Unfortunately, most restaurants don’t really use pure wasabi; they use fake wasabi instead. Fake wasabi is made with a mixture of horseradish, mustard, cornstarch, food coloring, and other ingredients. It can include starch, so it may not provide you with the safe, gluten-free seafood dish you were hoping for.

5. Sushi That Has Rice Seasoned with Sushi Vinegar 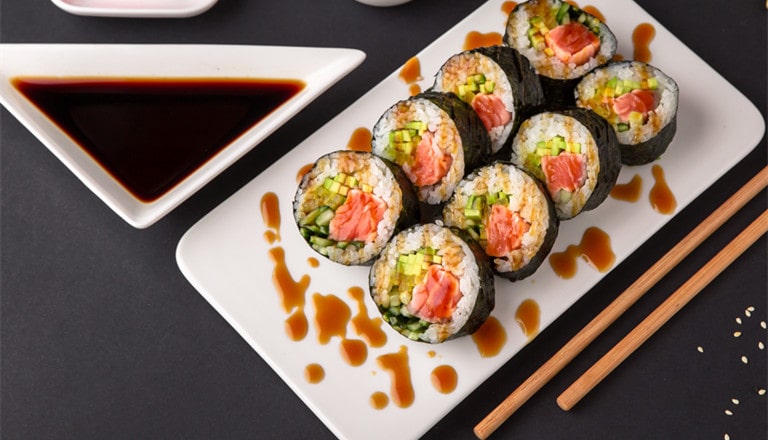 Sushi rice is made with vinegar, sugar, salt, and water. However, some types of vinegar such as rice vinegar and barley vinegar can be grain-derived and there could also be cross-contamination issues.

So, your vinegar-seasoned rice could contain gluten, unless it’s made with distilled rice vinegar, which is considered to be gluten-free.

A Guide to Ordering Gluten-Free Sushi 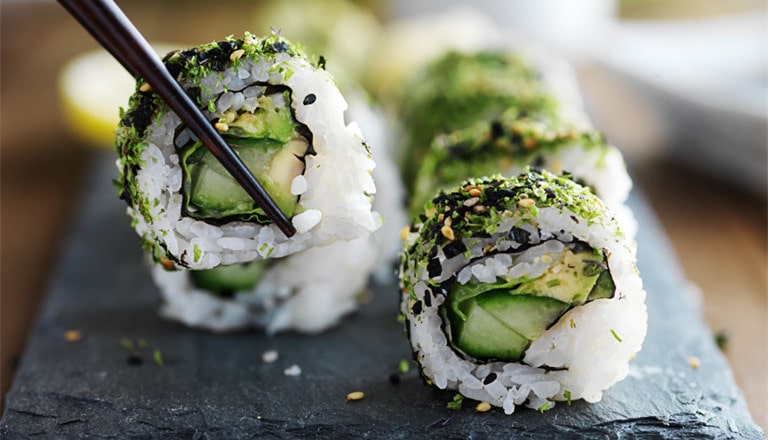 Here are some helpful tips you can use to avoid gluten when ordering sushi:

#1. Don’t buy your sushi from supermarkets as they can contain ingredients and additives that may have gluten. Get fresh sushi instead.

#2. Having gluten sensitivity is a serious matter, so chefs and restaurants will gladly take your health concerns into account when making your sushi.

#3. If the restaurant has a sushi bar, you can watch the chef prepare sushi and be assured that it will be free of gluten.

#4. Opt for simple sushi as they are made with fewer ingredients. This greatly reduces the possibility of it containing gluten or possible contamination, making them perfect for your diet.

#5. If you have celiac disease or gluten sensitivity that can cause adverse health effects, it’s a good idea to emphasize that to your server. Make sure they inform the chef about your dietary restrictions, especially if the restaurant uses soy sauce. It will also help prevent cross-contamination, which can happen when gluten-free sushi is prepared with the same cutting board, knives, and other equipment as regular sushi.

#6. You can also ask your chef to make the sushi without seasoning it with rice vinegar. It will be a healthier approach, but it will result in not-so-neatly rolled sushi rolls.

#7. Consider carrying your own wasabi and gluten-free soy sauce. It will help you get the authentic sushi taste without compromising your health!

While you can take all these precautions, keep in mind that cross-contamination can occur. So, unless you’re sure that the sushi restaurant you’re visiting adopts safe sushi-making practices, please don’t take a chance on your health.

When in doubt, it’s always better to make your own sushi at home. It’s a foolproof way of ensuring that your sushi is free from gluten while still being delicious.