Home RecipesCucumber Noodles with a Cashew, Soy and Ginger Dressing

About This Cucumber Noodles Recipe

Noodles are a big part of Asian cuisine and culture. However, a few years ago we saw a global influx of vegetable substitutions for egg noodles. Courgettes, gourds, even cabbage – you name it, we were spiralizing it and making noodles.

This recipe is incredibly refreshing, bright, and has a wonderful texture, but unlike a lot of raw dishes that lack potency, this dish has a kick of flavour.

The marriage of flavours between the soy sauce, honey and cashew nut butter, are exacerbated by the brightness of lemon, warmth of ginger and that wonderful allium from the raw garlic clove.

What’s more, although this recipe does call for some minor specialist equipment, it’s actually incredibly low effort and super fast. Coming home from a hard day of work? On the move and need a quick but nutritious meal between errands? Perhaps your body is craving a boost of nutrition? Then this is the recipe for you. Fast, fresh and delicious.

Most kitchens will now possess a spiraliser of sorts, and that is the secret to this recipe. However, you could make this dish by using a vegetable peeler and making ribbons with the cucumber instead. 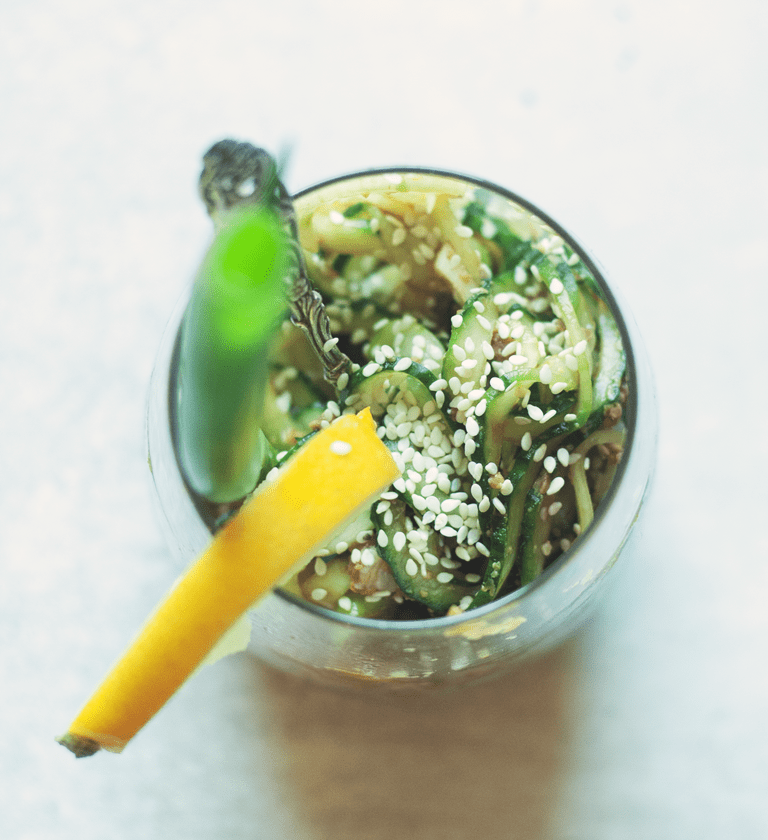 What You Need for This Cucumber Noodles Recipe 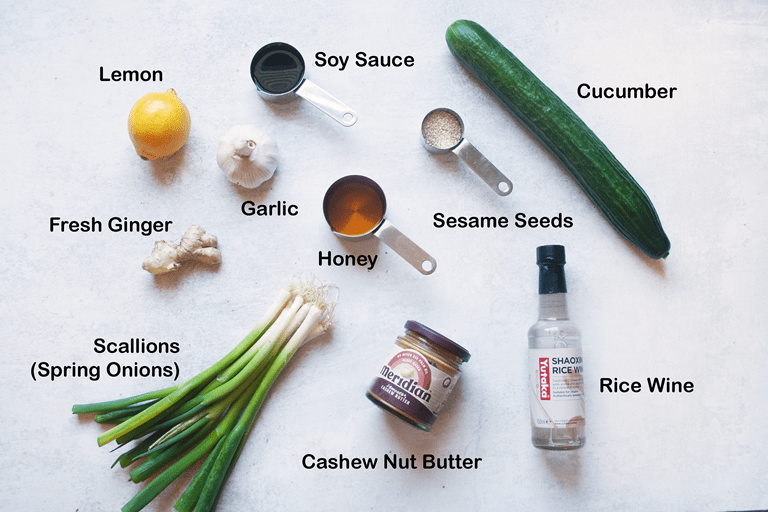 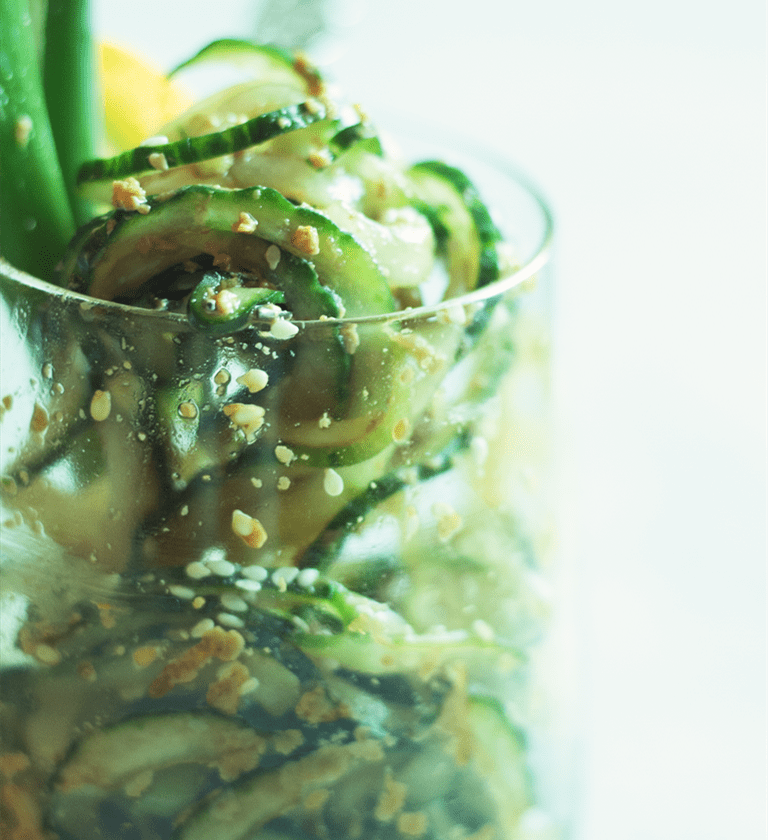 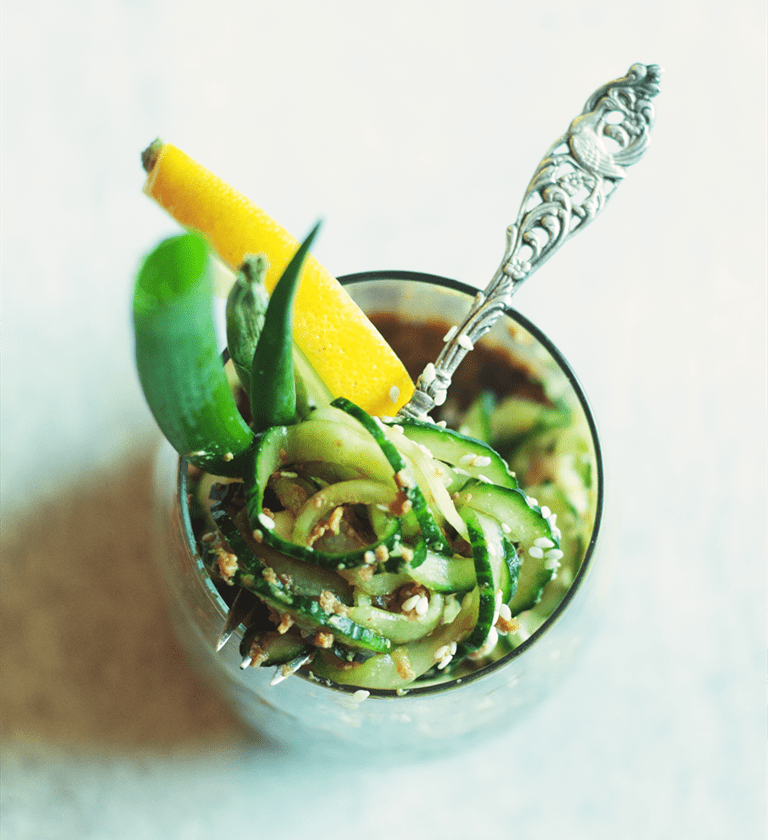 Can I Make This Ahead Of Time?

We recommend that you eat this dish immediately. This is mainly to prevent the cucumber wilting, discolouring, oxidising and becoming a bit ‘naff’ looking. However, you can make the sauce ahead and leave it in an air-proof container and then when it comes to eating, just spiralise the cucumber and mix together!

Is It Safe To Eat Raw Lemon Peel?

Absolutely. In fact, lemon peel or zest has a tonne of vitamins and minerals. However, you should be mindful about what sort of lemon you’re purchasing and if they’ve been treated with insecticides or pesticides. You can still eat the lemon zest, but wash it well before zesting. To err-on-the-side-of-caution, I always buy organic lemons so I have the peace of mind they’ve not been treated.

Where Can I Find The Specialist Ingredients?

Most Asian grocery stores should carry Rice Wine. Nut butter has become so popular now, that you can always find it in health food shops, and most supermarkets. Failing those options, you can order these ingredients on Amazon or online grocery stores. 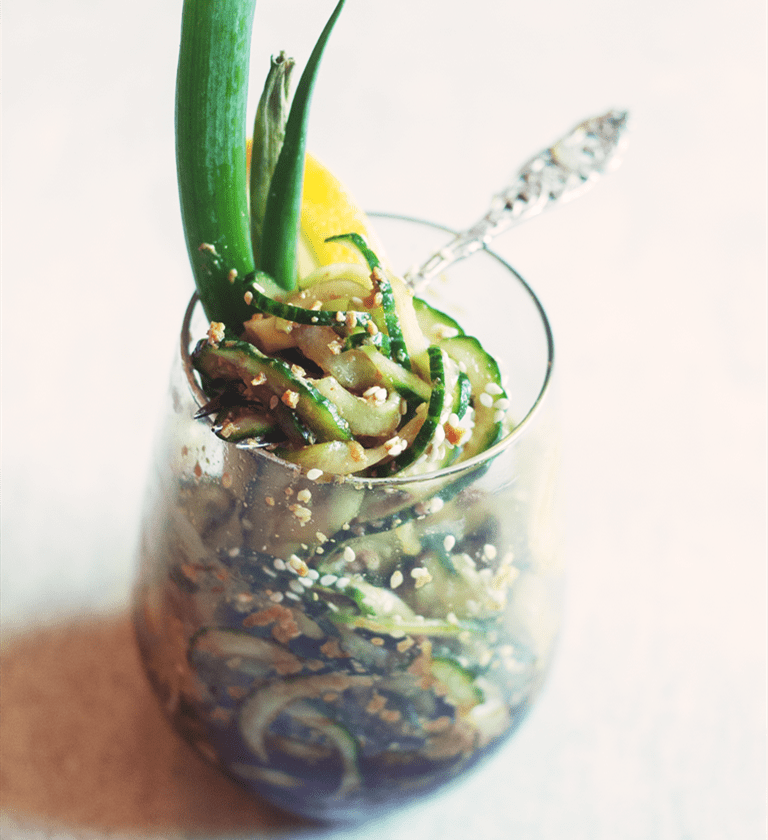 Cucumber Noodles with a Cashew, Soy and Ginger Dressing

Coming home from a hard day of work? On the move and need a quick but nutritious meal between errands? Perhaps your body is craving a boost of nutrition? Then this is the recipe for you. Fast, fresh and delicious.

How To Make Cucumber Noodles Step By Step

● You can easily scale this recipe up for parties, BBQs or to feed the entire family at a gathering.
● Don’t over handle the cucumber when you’re mixing it into the sauce. You want it to remain crunchy without releasing water into the dressing.
● If you want a thicker sauce, you can heat the dressing over low heat in a saucepan. Let it cool, and then tumble the cucumber in after.