Home Tips Tex Mex Vs. Mexican Food: Which Is Better?

The battle of the two most famous cuisines, Tex Mex and Mexican, has always been a hot topic. But what do you know about either food?

From history and origins to the ingredient list and cooking techniques, they aren’t as similar as you might think. This article discusses everything you need to know about the difference between tex mex vs. Mexican food in terms of origin, taste, and iconic dishes. So without further ado, let’s get started!

What Is Mexican Food? 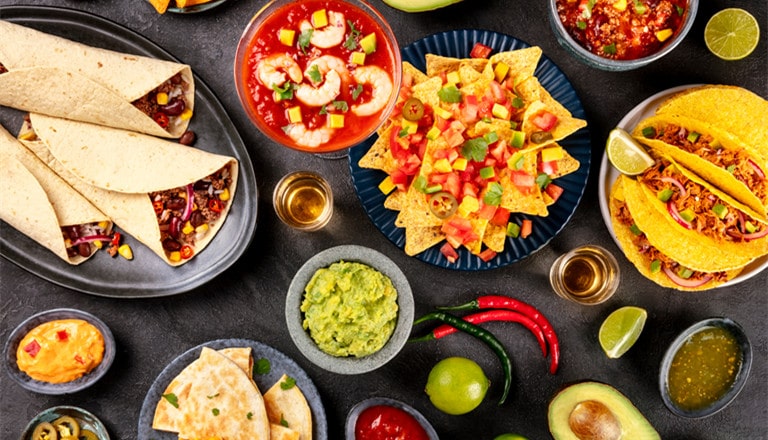 Mexican food is known for its robust, bold, and vibrant flavors, which are packed with deliciousness. Authentic Mexican food is often perceived as spicy, but in reality, it has a unique depth of earthy and fresh flavors due to its heavy use of seasoning, herbs, and vegetables.

Mexican food also contains a variety of spices like chilies which gives it a kick. Moreover, Mexican food is also well-known for being hot, spicy, and vibrant to the eye. There’s never a dull moment with a table spread featuring Mexican cuisine.

Mexican food has a rich history, much like its flavor profile. Different cultures have influenced Mexican cuisine, which has evolved and refined into what we now know.

However, the origins of Mexican food stemmed from Mesoamerican cuisine and with noteworthy contributions from both the Spanish and French explorers.

Both the Mayan and Aztec culture is represented in Mexican food. Not only the ingredients like the use of chili, corn, beans, honey, and chocolate but the cooking methodology can also be seen mirrored in Mexican food.

Similarly, the introduction of pork, beef, and chicken by the Spaniards, as well as the use of garlic, wine, and onions in cooking, enabled a variety of flavorful Mexican dishes to be invented. The French imparted knowledge of baked goods like Bolilo and sweet bread.

Mexican food comprises fresh elements, bold flavors, and vibrant vegetables, which gives us an authentic Mexican experience. The most typically used ingredients in Mexican cuisine include beans, limes, avocado, and rice. These four are the most commonly used ingredients that feature nearly every dish on the Mexican menu.

Apart from the famous four, there are corn, tomatoes, jicama, and jalapenos. Not to forget, chili peppers and herbs like coriander, cilantro, oregano, and epazote leaves are also a note-worthy part of the list.

Famous Mexican dishes which every foodie has to try in order to get the real taste of Mexico include chilaquiles. Chilaquiles is a breakfast dish made with totops or fried/toasted corn tortillas, dipped in hot sauce with shredded chicken and beef, chorizo, and eggs on top. It also consists of cheese, coriander and onions served with a side of fried beans.

We often think of tacos and burritos when people say “Mexican food”. While they are truly iconic representations of Mexican cuisine, you have several other options as well. From chiles en nogada, to elote, and mole, these are some of the most popularly consumed Mexican dishes worldwide.

What Is Tex Mex Food? 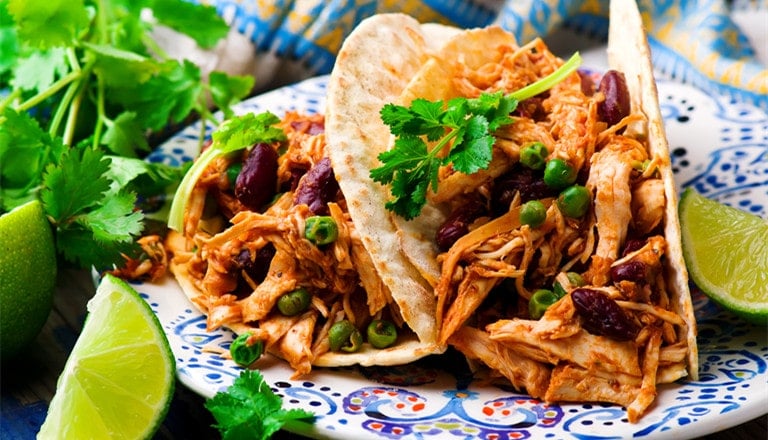 Tex Mex, as evident by its name, is a Texan-Mexican cuisine. Tex Mex is basically Mexican food in America, which first emerged in Texas. Tex Mex is a type or variety of Mexican food and a mixture of both cuisines, but with fewer base ingredients.

However, it is neither wholly American nor truly Mexican. It’s somewhere in between. What sets tex mex food apart is the use of ingredients like yellow cheese or beef, which is not generally used in Mexican food.

The origin story of Tex Mex food starts with the settlement of Anglo Americans in Texas. This is where they first tasted Mexican cuisine. As more of them began to occupy the place, Mexican food became widely popular and in demand.

Restaurants and home cooks made do with what ingredients they had, the quintessential Texan ingredients being wheat flour and beef. They began incorporating elements that deviated from the authentic Mexican ingredients, like putting ground beef in enchiladas.

By the 1940s, the word Tex Mex first appeared in print, and by the 1970s, cookbooks started to highlight the differences between real Mexican food and the one served north of the border.

Tex Mex food is spicy with a delicious variety of flavors. The unique flavor profile of tex mex food is derived from ingredients like shredded yellow cheese, meat, and beans as well as spices like chili peppers and cumin and flour tortillas.

In particular, beef, canned vegetables, black beans, and wheat flour are the main ingredients that set it apart from Mexican food.

While most folks aren’t properly familiar with this, foods like nachos and fajitas are a part of Tex Mex cuisine. Nachos were first made in Mexico, but only because some Texans demanded an evening snack be prepared.

Moreover, chili con carne is one of the most famous Tex Mex foods featuring a tomato gravy with ground beef, chili peppers, beans, and other spices and ingredients.

Tex Mex Vs. Mexican Food: Which Is Better? 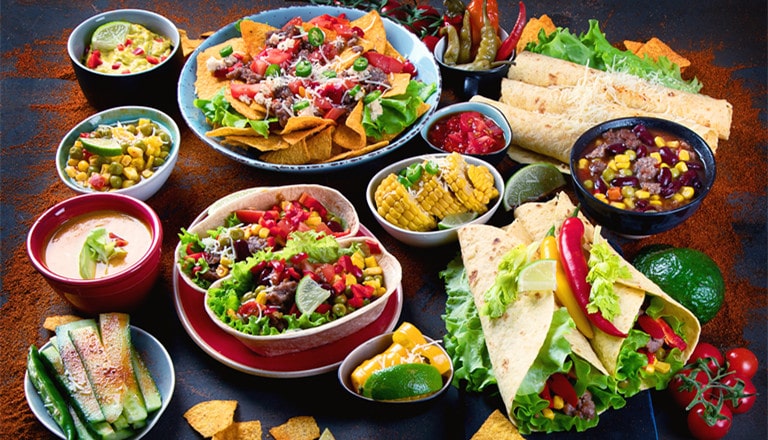 While equally delicious, Mexican food is spicier than Tex Mex food. But the main difference between both cuisines can be noted in the use of ingredients. Mexican food uses only white cheese, while yellow cheese, like cheddar, is part of Tex Mex cuisine. Similarly, Mexican food typically comprises sweet corn and beans with loads of chili peppers and spices.

Let’s take the example of a tortilla. If you’re in a Tex Mex restaurant, you’ll be served with wheat flour tortillas rather than the Mexican classic corn tortillas. The food will contain chili powder, while at a Mexican restaurant, you’ll find loads of herbs and spices adorned in the dish.

So which one is better? Well, there is no correct answer because food is always a subjective experience. Why not try both of these cuisines and enjoy a bit of both worlds? Each has a lot to offer in terms of flavor, culture, and history.